Although I started to regularly listen to Wait Wait... Don't Tell Me! in 2005, I didn't immediately start taking notes until some time later in 2006. While NPR site would include details about each show's segments, guests and panelists, they didn't keep track of any scores or how many times a panelist appeared on the show.

Eventually, I would start collecting that information in a small notebook; but, I lost it after an office move or one of several cleaning sprees. So, the idea of storing the data in a database and creating a front-end for that came up. 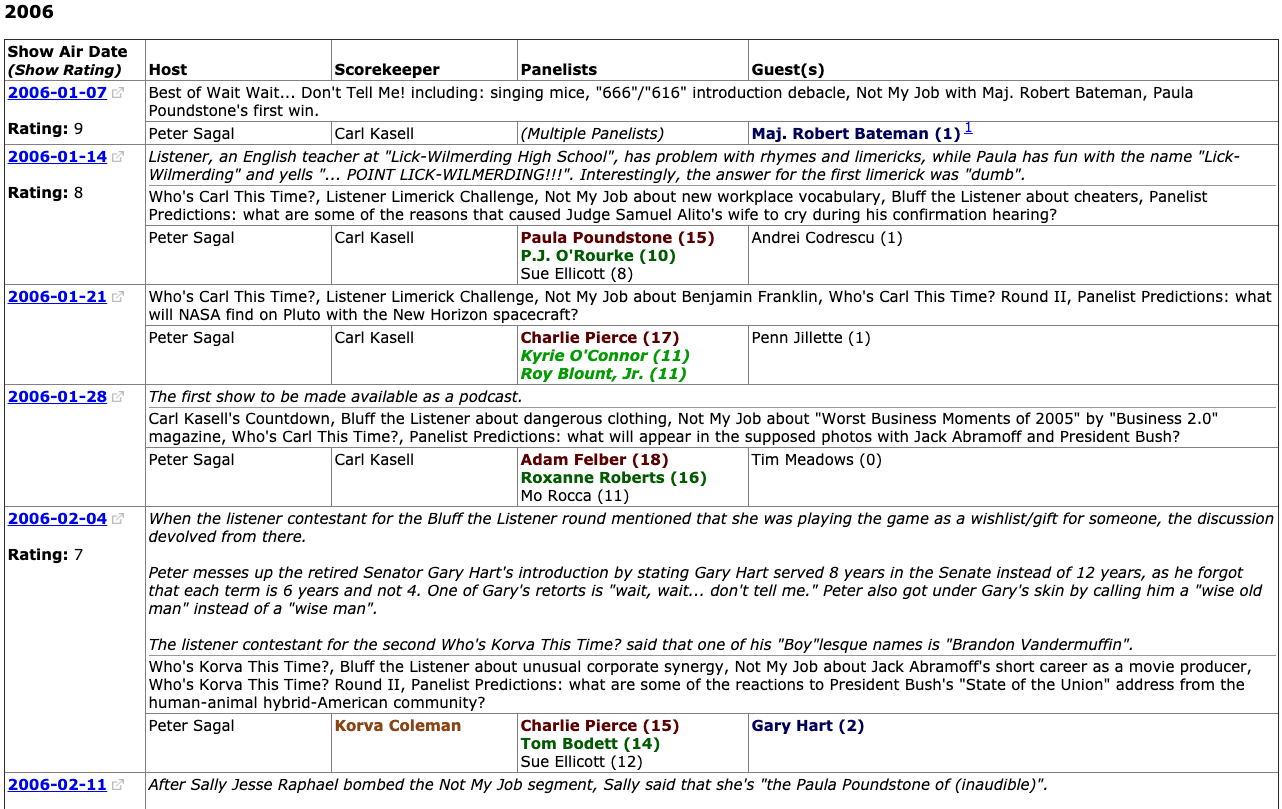 I decided to build the site using PHP and use MySQL for the database as I already had a web server at home that hosted my website, written in PHP, and had a MySQL database server running on another server. After a couple months of work during my spare time, I published the first version of the site at the end of July 2007.

Version 2 of the Stats Page was an evolutionary update to the site with the addition of more detailed panelist statistics and a pair of graphs showing how well each panelist has done.

The name "Stats Page" was pretty apt for the first two versions of the site, due to the fact that everything was presented on a single web page. As more features and details were added, along with the number of shows, the single page design made became unwieldy from both a user experience and a programming standpoint.

Thus, I postponed adding new features to the site until I could sit down and do a complete overhaul of the site. Since PHP was still my go-to language at that point, I decided to go with the Silex micro-framework as the foundation for the new site. This allowed me to create a very rudimentary MVC design and create views for each of the core items: shows, guests, hosts, panelists and scorekeepers. 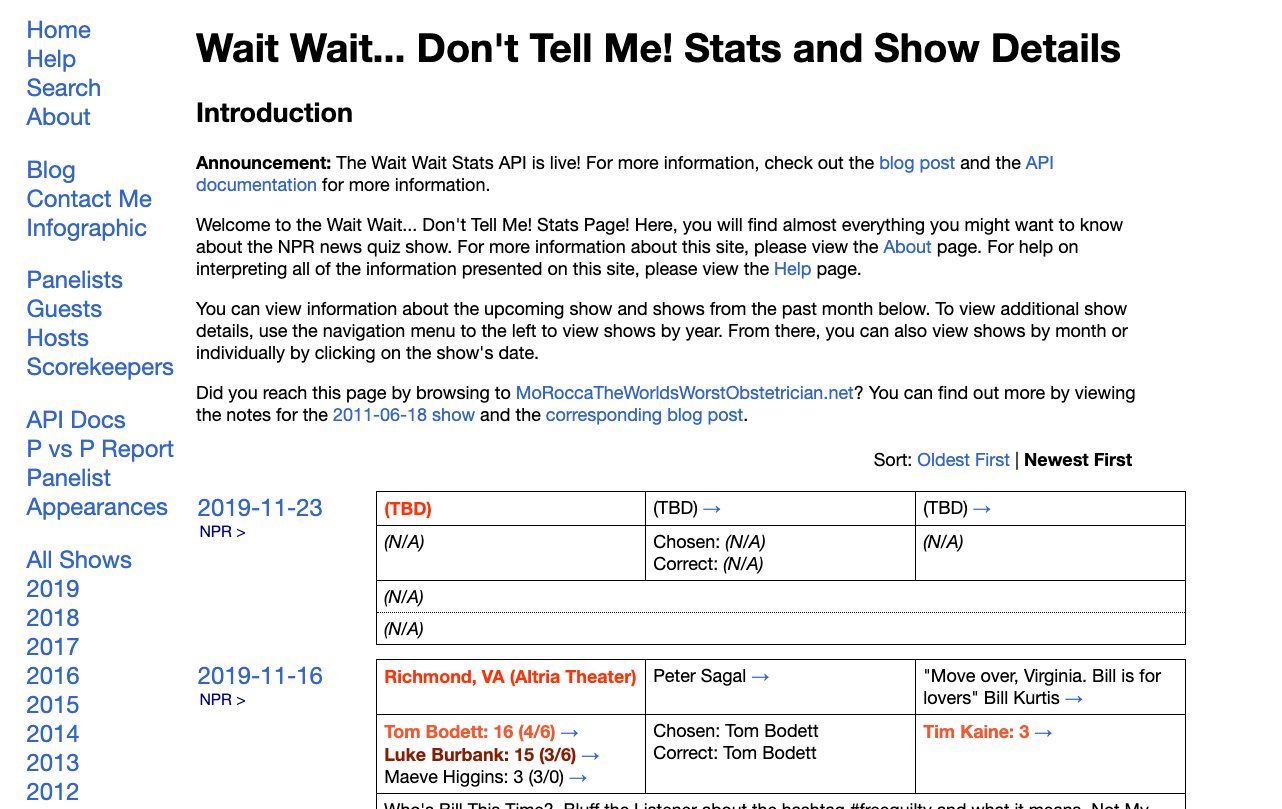 Another key requirement that I had for the new version of the site was to make it more mobile-friendly. At that time, I went as minimalistic as possible when it came to the design and in terms of not requiring the use of JavaScript. I would only make use of JavaScript later to create interactive panelist graphs.

After a long-ish development process, the new version of the site launched in 2014. Since then, people have asked for additional features and analysis of the data that I've collected. I was able to add the introductions that Bill Kurtis would use to describe himself at the start of the show and started to keep track of Bluff the Listener data.

As I continued to do more data analysis and field requests that I would get, there wasn't a clean way to add those to the Stats Page. Between that and the real need to extend and redesign the Stats Page for a more modern and responsive web landscape, I decided to build the next version of the Stats Page from scratch again.

By building the site from scratch again allowed me to move away from PHP and actually code in the language that I really loved and had started to get back into more: Python. I had been already been using Python for projects at work and with some of the Wait Wait data analysis requests.

For the Stats Page itself, it had to be mobile-first and maintain a minimalist design. For the front-end, I picked the Materialize framework, and Flask and Jinja2 would handle the backend. To keep things as simple as possible, I limited the front-end customization to only CSS overrides. 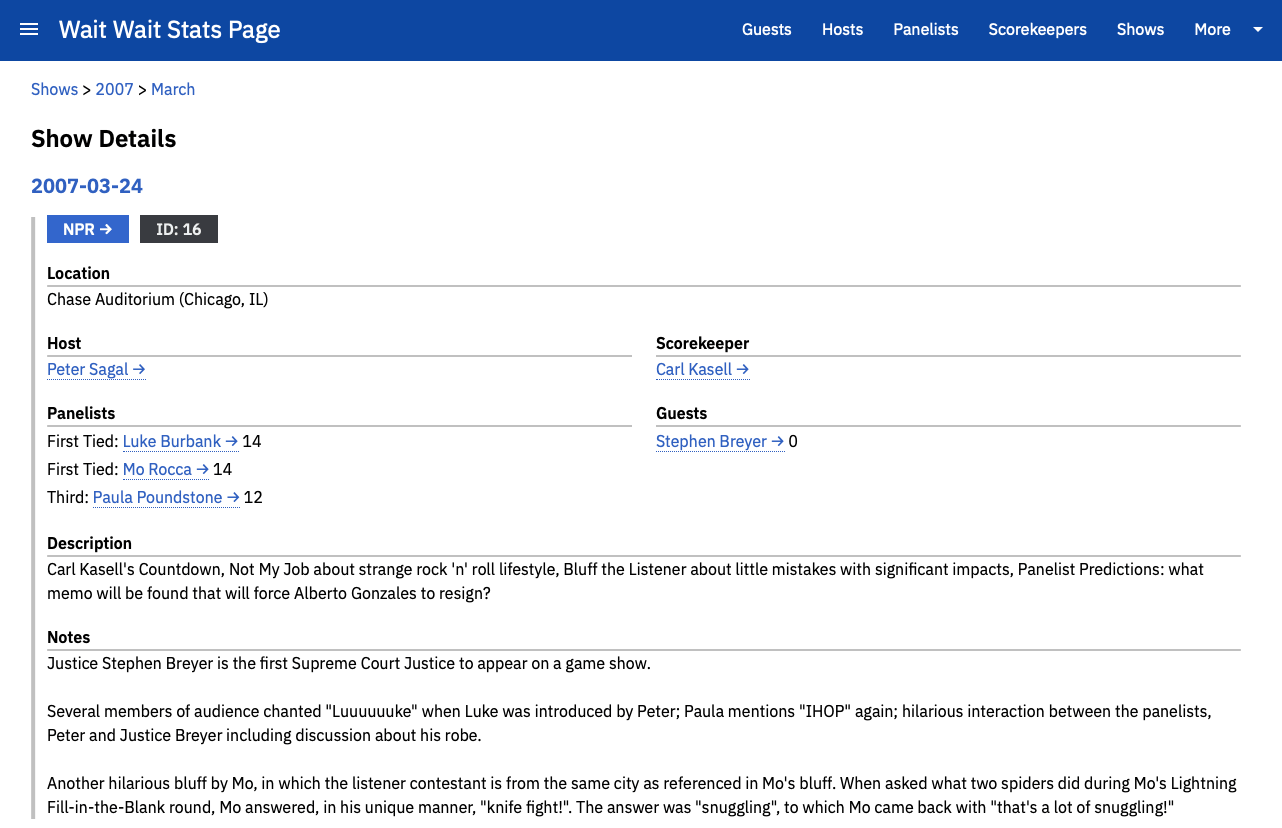 While most of the features of the Stats Page made it over to the new version, a few changes and omissions had to be made. The first change is the omission of the panelist scoring graphs due to need to completely overhaul them to be mobile-first. Those graphs will eventually be made available via the Wait Wait... Don't Tell Me! Reports site.

Another change is that going to the guest, host, panelist, scorekeeper and show views will only provide a list of the respective items. Most will provide a link at the bottom to get a full detail view of all items. This was done to reduce overall clutter.

The new version brings two big changes behind the scenes: switching to Version 2 of the Wait Wait Stats Library (wwdtm) and making use of Flask Blueprints to make the application code more modular and easier to maintain.

While neither of those changes translate to anything visible in the site's front-end, the Materialize version was bumped from 1.0.0 to 1.1.0-alpha. Even though it is an alpha release of the framework, it does fix some issues and also includes some security fixes.